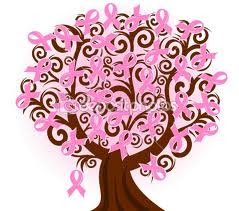 Never wrote a post that the potential to outright anger so many people.

So let me start with a key disclaimer. I am a man, and I really despise it when men talk about women’s issues when they are not educated or experienced in any way about them. I have never interacted with the cause of breast cancer as a fundraiser – so in some ways I offer an objective perspective on this film. BUT I won’t be commenting on the ‘issue’ of breast cancer or the politics of the work. You could fill the state of Texas with what I don’t know, so I won’t weigh in on something I’m ignorant about.

My interest in making sure I got to the pre-screening of this film was as a fundraiser ( and although my current job doesn’t look like traditional fundraising I’ve been in the sector for over a decade ). I’ve been waiting for a film like this for a long time.

You see this kind of documentary is both a fundraisers greatest nightmare…and kind of our secret joy.

As a profession, we’re supposed to stand up for peers, cause marketing, event planning and dollars raised. As individuals often we feel disconnected from the actual way dollars are spent, research is done and for those of us not in that part of the sector ( that’s me ) find mega-events and personal-ask programs distasteful ( like big firm lawyers who have to stand side by side with peers who advertise in washroom stalls – both do honourable important work but one has a crisp-easy-clean lifestyle and the other has the guts to mix it up to help honest hard working folks but is seen as unpleasant ).

I was relishing the tough questions for the fundraising profession – so the film like many documentaries quickly sets about establishing the crusaders ( historians against the cure for the cure ) , the honourably outraged ( a stage four survivor focus group that drops emotional bombs throughout the movie that blow out your senses with real human questions that take you off the course, a discussion about the machine ) and the enemy ( corporate-friendly nonprofit leaders complete with anti-hero, conveniently botoxed to fuel more outrage ). My sadness is that the tone and conversation stayed there in this loop of very focused 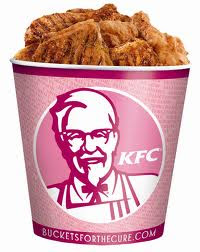 accusation towards a short list of sinners when the naughty list of “pinkwashers” is so much, much bigger.

But it was a damn good and powerful start to the dialogue.

Although it didn’t have the teeth I wanted, I still think it’s 100% required viewing for all career fundraisers. You may even find some peace here seeing questions asked that you’ve wished to raise in your organization. Maybe your donors and the community of the cause you serve will rise up and start asking questions too. The public often thinks fundraisers are bounty hunters but I suspect ( and the few blogs from more official peer sources like CharityVillage.com and Hilborn, Canada’s two largest fundraising enews teams seem to agree ) that they welcome and encourage this conversation.

Don’t get me wrong, when I say it has dulled edges I mean on the fundraising front – on the cause of cancer side there are some gut-wrenching scenes, discussions and discoveries. A scene with thousands participating in a run past the Egyptian pyramids really messed me up, everyone knows the pink thing has gone far but just how far will scare you. That being said, it is SO 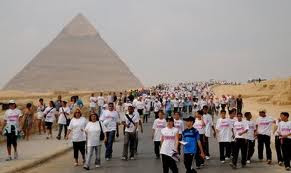 EASY to vilify corporations for flogging the cause and members of the public to get slactivated ( thanks Lee Rose ) but as the fundraisers in events/cause marketing always show me, the numbers don’t lie – $ is raised, people come out – EVERYONE wants to help, to honestly express love, loss, grief, anger but no cause is so simple that you can take aim, come together and “end” it. 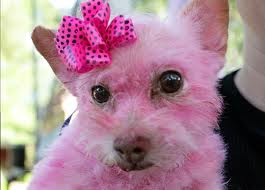 In the end, like most members of the public, I’m like this dog. We’re covered in pink and we don’t really have a choice nor do we really understand why. Question is, will this movie move you enough to bite something? Someone?

The pink-pirates are betting no.

Because that first someone is going to be your best friend whose mom has cancer – but somewhere we have to have this discussion.

I for one hope for my profession, it’s a big time discussion at the major conferences we have coming up. 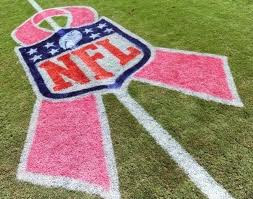 In the meantime, I know it won’t be date night at the movies but I highly highly encourage you to get out and watch this movie. Happy Superbowl Sunday.

Want to watch it as a group with a discussion afterward?
Let me know, I’ll set it up.

PPs. The NFB is a national treasure. Canada is greater for its’ existence.

4 Replies to “Pink Ribbons Inc. – A first step to dialogue”