It’s almost ironic that this blog is called “”Adventures in Networking” because this is a story of a truly adventurous networking meeting, far beyond the walls of my beloved Starbucks. Jaime Stein is a guy I’ve been trying to meet with for over a year, our schedules just never came together.

We are very similar in some ways, but with all humility he is me to the power of 2. Yes we both recently have had two boys, moved into financial institutions, love our alm

a mater UofT and have a healthy obsession with the future of “social business”. But whereas I’m a novice, his business IS social. Whereas I read hundreds of business books and learn informally he worked his butt off to get his MBA via the Rotman morning program and rocked it. We met last week to network in a very odd way, you see Jaime is about to climb Mount friggin Kilimanjaro to help build Canada’s first National Public Cord Blood Bank. He’s part of the C-Suite cabinet. Instead of training on his own with earplugs

in his ears this networking genius decides to open up his hikes super social. Opens his schedule on Googledocs and invites his entire network to come for a walk and talk. So we walk. 3 hours, 13 kilometres on the Toronto lakeshore. I learned so much personally and professionally. From Jaime and his friend from the CFL Eric Holmes who came too. 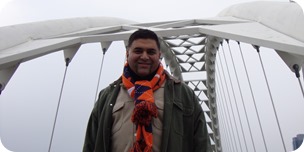 Y’know Steve Jobs and a lot of other gamechangers were big fans of the walk and talk. I’m a big advocate of the walk and think. In 2013 I think I need to conduct more meetings like this. Here’s Jaime’s post on our walk. I encourage you to follow Jaime on Twitter, follow his networking adventure leading him to Kilimanjaro via #KilihikeTO and the climb team at #Climb4Cord 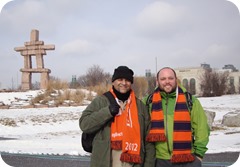 . If you are moved to do so, please donate too. Thank you Jaime for a true adventure in networking. I’m proud to be part of team Orange Scarf, good luck on the climb. You have my donation, my support and my gratitude for inspiration and education.                Paul Nazareth           Ps. Since we’re both social media junkies. My gift to you. Your own meme

One Reply to “A true networking adventure. #KilihikeTO with Jaime Stein”